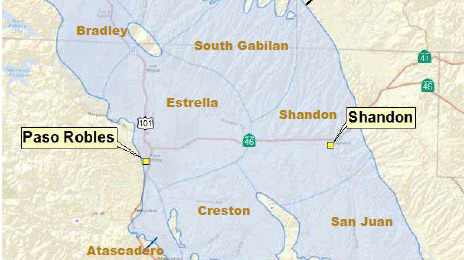 The San Luis Obispo County Board of Supervisors voted on Tuesday to start the process of creating a Paso Robles groundwater basin district. The move follows the state’s passage last month of new legislation to permit the district’s formation.

On a 4-1 vote, the supervisors directed county staff to prepare a petition to the Local Agency Formation Commission to form a new water district. Supervisor Debbie Arnold voted against the plan.

The new district would be be responsible for managing the 800-square-mile Paso Robles groundwater basin. The county could take up to eight months to prepare the paperwork, which is expected to cost $350,000. After the petition is ready, another vote of the supervisors is required to submit it to LAFCO.

Before a district is formed, a vote of a majority of landowners in the basin will be required.

Read more in the SLO Tribune