High satisfaction linked to more optimism that area is improving 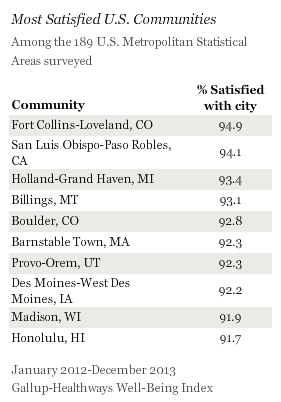 It looks like Paso Robles’s city fathers had it right when they labeled the town “Darn Near Paradise.” In yet another accolade of San Luis Obispo County’s favorable living conditions, a new poll by Gallup Well-Being ranks this region’s population as the second most satisfied in the United States.

Fort Collins-Loveland, Colo. (94.9%) and San Luis Obispo-Paso Robles, Calif. (94.1%) residents were the most likely to be satisfied with the city or area where they live in 2012-2013, according to the poll. Residents of Rockford, Ill. (72.8%) and Stockton, Calif. (73.3%) had the lowest satisfaction rates. On an absolute basis, satisfaction is high in every community, with only seven out of 189 communities Gallup surveyed in 2012-2013 having satisfaction scores below 75%. High satisfaction linked to more optimism that area is improving, Gallup reports.

Gallup and Healthways asked Americans how satisfied they were with the city or area in which they lived as part of the Gallup-Healthways Well-Being Index. Gallup interviewed at least 300 adults aged 18 and older in 189 metropolitan areas throughout 2012-2013. Each sample was weighted to match the demographic characteristics of that area, Gallup reports.