Pacifica Commercial Realty is pleased to exclusively represent Calverne Sayler for the sale of his vineyards located at 6955 Estrella Road, Paso Robles, CA, in the heart of the Paso Robles AVA.

A vineyard re-invigoration program under the direction of Kesselring Vineyard Management Services was initiated in late spring of 2014.  The 2014 harvest is estimated that it will be 3 tons per acre.  The target for future yields is a range of 4.5 to 5.5 tons per acre.  Some replanting and replacement planting is under investigation.

Other improvements on the property include a ranch house, modular house, barns stables and riding arenas.  The equestrian center and ranch house is currently leased to an equestrian operator for $5,500 per month.

There are two wells a large agricultural well tested at 257 gallons per minute, and a small well that serves the houses and equestrian area that tested at 16 gallons per minute.  There is an irrigation pond that approximately measures 150’ by 250’ with liner.

The Property is enrolled in the Williamson Act.

The Property is located at 6955 Estrella Road, Paso Robles, CA, 4.0 miles east of US 101, 3.5 miles north of Highway 46 east and 1.5 miles from the intersection of Airport and Estrella Roads.

There are other vineyards and wineries in the immediate area including J. Lohr, Riverstar, Castoro Vineyards, and Silver Horse.

The vineyard is in the “Paso Robles” AVA and may, in the future, also be located in the “Estrella” AVA 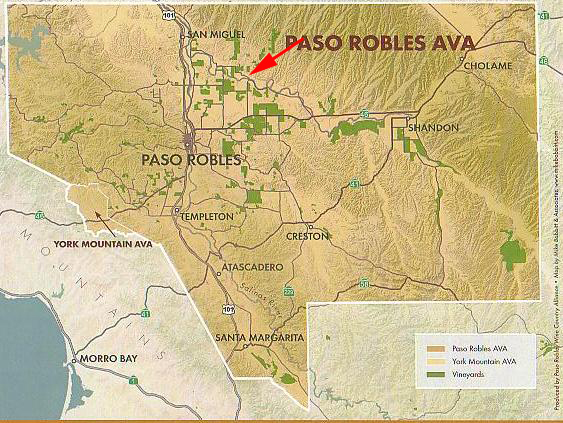 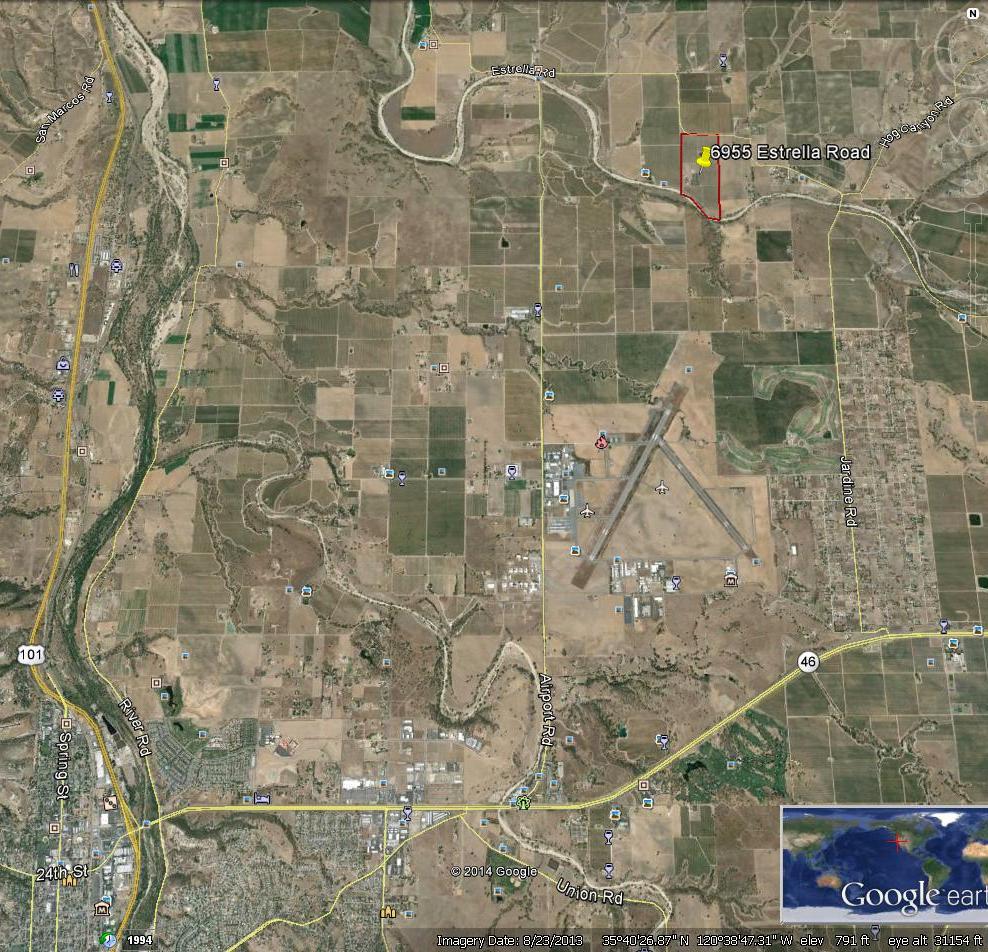 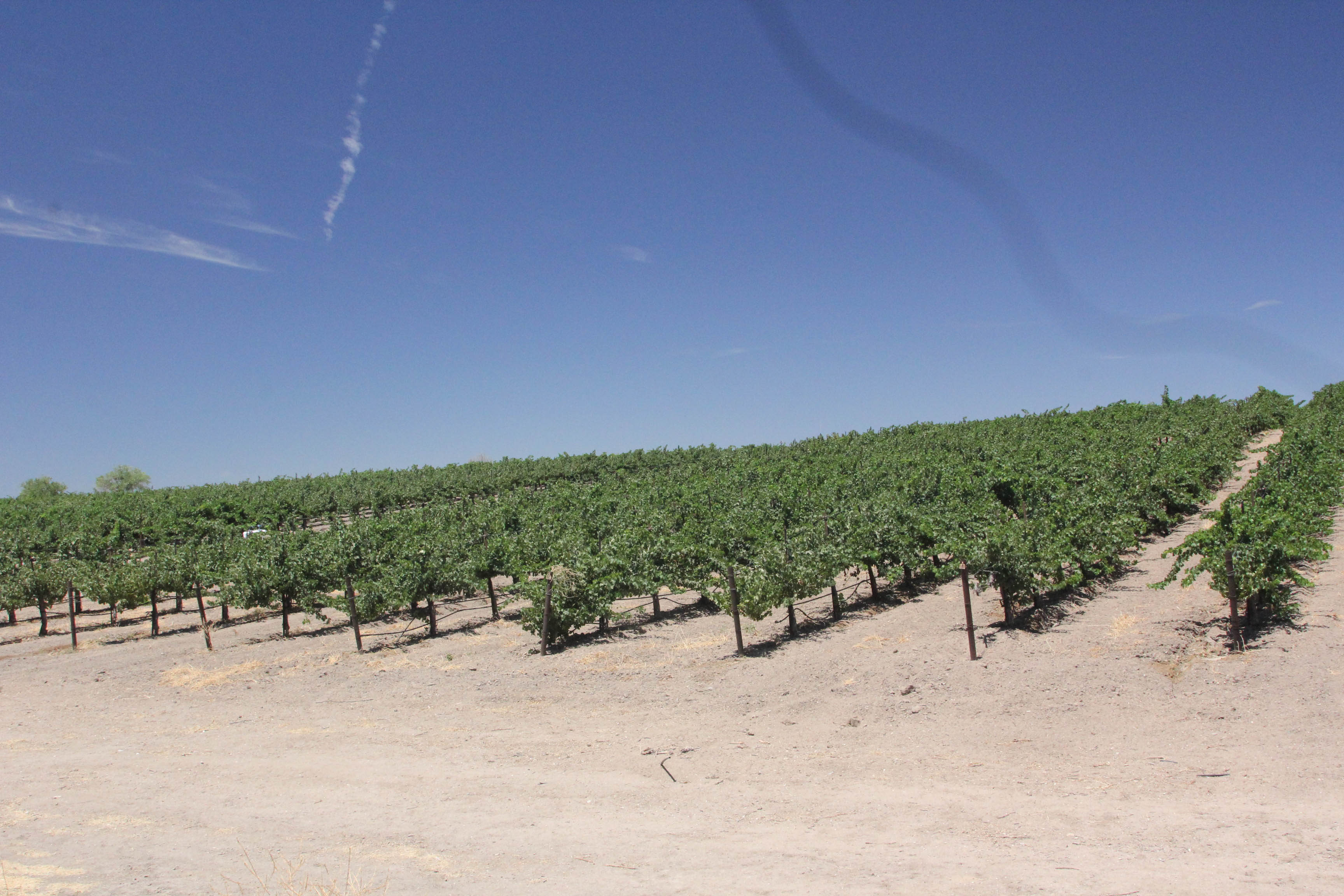 The Property is developed with +/- 66 acres of vineyards and a +/- 11.5 acre ranch headwuarters and equestrian center.  2 Acres are developed with an irrigation pond, with the remaining land used for internal farm roads and river.

The Property has a gentle slope with a seventy foot elevation change from the lowest to the highest elevation on each parcel. The soil designation is primarily;

There is three phase electrical service from Pacific Gas and Electric which bisects the parcel.  Television and Internet services are accessed via satellite providers.  There are on-lot septic systems installed for the house and ranch facilities.  There is no natural gas service on the Property.

The Property is located in flood zone”A” and area “X” according to the National Flood Insurance Rate Maps, San Luis Obispo County.

The Property is zoned “AG” General Agriculture with an “AR” overlay, Airport Review.

The vineyard was farmed organically from 2010 to 2013.  The organic practices were terminated in 2014 to promote a re-invigoration program for the vines.  The historical production ranged from 2 to 4 tons per acre.   Weight certificates from the 2012 harvest document that Castoro Cellars and Sextant winery received a total of 256.77 tons of grapes, which calculates as 3.89 tons per acre.  The 2013 harvest was not documented and the yields were extremely low.  The return to traditional farming practices, along with the vineyard re-invigoration program will increase the probable annual yield in the future to a range of 4.5 to 5.5 tons per acre.

Under the direction of Bill Kesselring of Kesselring Vineyard Management Services, a vineyard re-invigoration program was started in the late spring of 2014.  Traditional vineyard practices have been reinstated  instead of the organic practices used in the past few years.  The vines have responded quickly, and Kesselring estimates that the 2014 harvest will yield approximately 3 tons per acre. Further a re-planting program is scheduled for early 2015.  A count of these replacement vines is forthcoming.

A system of wind machines is also being considered to protect the lower blocks from frost damage.

The Primary residence contains +/- 2,818 square feet of living space with three bedrooms and four bathrooms.  The kitchen is improved with top-of-the-line appliances and granite countertops.  There are two rock fireplaces. The residence also includes a wood deck, a 240 square foot wine cellar and an attached carport. The residence has a stucco exterior with a tile roof.

The second residence is an 1,100 square foot modular home with three bedrooms and two baths.  It is occupied by the Seller’s grandson who is serving as the ranch manager.

There is a third residential unit of 990 square feet with two bedrooms and one bath.

A fourth residence of 1,160 square feet is currently uninhabitable.

The Equestrian Facility is comprised of two horse barns, a hay barn, round pen and two cutting arenas;

The homes and equestrian facilities (with the exception of the modular home) have been leased to one operator for 6 years.  The current rent is $5,500 per month.

The ranch has 2 producing wells;

The Property is subject to the Paso Robles ground water basin “Urgency Ordinance”, which restricts new vineyard plantings and additional development on the site.  A more detailed explanation is available at https://pasowinerealestate.com/frequently-asked-questions-concerning-paso-robles-groundwater-basin-ordinance-2/.

The Property is subject to A Williamson Act Ag Preserve agreement with the County.