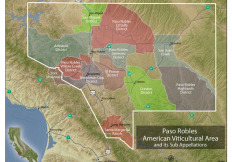 Click here to see the full map of the new viticultural areas. Map from the Paso Robles Wine Alliance.

TTB is issuing this regulation in response to a petition from an association of local vintners and grape grower, the agency said in an announcement. TTB designates viticultural areas to allow vintners to better describe the origin of their wines and to allow consumers to better identify wines they may purchase.

Eleven petitions were submitted simultaneously last year by the Paso Robles American Viticultural Area Committee, a local wine industry group whose 59 members cumulatively own or manage over 10,000 acres of vineyards within the proposed viticultural areas. TTB designates viticultural areas to allow vintners to better describe the origin of their wines and to allow consumers to better identify wines they may purchase. In Notice No. 140, a notice of proposed rulemaking published in the Federal Register on September 20, 2013, TTB proposes the following new viticultural areas:

The 11 new viticultural areas are as follows:

‘We wanted science to prevail over politics in defining the boundaries of the new appellations,’ said Steve Lohr, chairman and chief executive of J. Lohr Vineyards & Wines, the largest producer in the Paso Robles American Viticultural Area (AVA), in the trade publication Decanter.com. ‘And we wanted to avoid future boundary skirmishes and confusing overlapping appellations that can occur when AVAs are proposed one at a time,’ he told the publication.

Lohr said the Paso Robles AVA is ‘one of the most diverse series of soils of any winegrowing region in the US’. There is often a 40 to 50 degree daily temperature swing during the growing season and a variation of 10 to 30 inches of average annual rainfall.

This final rule is effective on November 10, 2014. The public may view the record for the 11 new viticultural areas on the “Regulations.gov” website within Docket No. TTB–2013–0009. Copies of the relevant rulemaking documents may be found on the TTB website at http://www.ttb.gov.